As I said in last week’s post, there hasn’t been a whole lot going on around here. The list of projects is pretty long – like entire roll of toilet paper long – but I’ve been ignoring it. It’s how I do.

Until this past week, that is.

I finally dragged myself into what used to be the kids’ bathroom to clean out the cabinets. Sounds simple enough, right? Neither of the kids have occupied the bathroom in several years now. How hard could it be? In fact, a friend suggested it would take me about five minutes. “Just throw everything away. Bam. You’re done. Then you have the rest of the day to do whatever you want.”

I was pumped when I left her house. I was going to cross something off the list and it was only going to take me five minutes. Maybe ten, if you counted getting the empty trash bag from the garage and then throwing the full trash bag away. That would leave me veritable hours to binge watch whatever I wanted to. Or read. Or both. AT THE SAME TIME!

It was a glorious plan.

These cabinets are big, cavernous, open spaces with no shelves or drawers. And this is what I was met with when I opened them up: 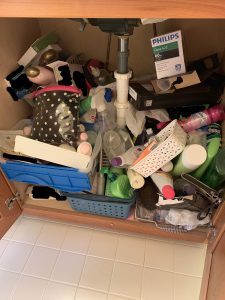 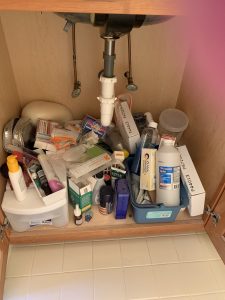 You guys. I found unopened boxes of expensive acne facial kits that were at least 12 years old in there. And lotions and creams and hair clips and shampoos and conditioners and brushes and even this: 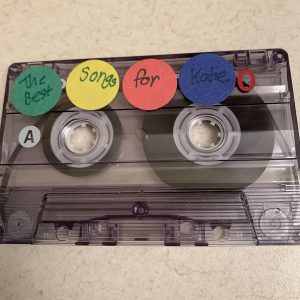 I have yet to listen to it, but I’m pretty excited about it.

Long story still long, but not as long as it could be, it took me a lot more than five minutes. Three 45-gallon trash bags, a lot of muttering, stiff joints, a little giggling, a lot of “what the heck?”, and an hour or so later, I was done. I threw EVERYTHING away, even as some of it made me cringe. But I’m fairly certain Marie Kondo would have been proud because there was nothing, and I mean nothing, that sparked anything even remotely close to joy.

Except the cassette tape.

Oh, wait. I didn’t actually throw everything away. There were the myriad plastic boxes and cosmetic bags I was able to salvage because I’m not a monster. They can be put to use somewhere else. Right?

Next step in there is to wash out the cabinets, get some larger baskets for under the sink and move all the guest towels from the linen closet to the bathroom. Maybe this way other people in the house won’t use the guest towels. And since there are only two of us who live here, I’m pretty sure you can guess who the “other people” is.

This is only the first phase in the plans for my guest bathroom makeover. But before I can get to that, I need to stain and paint the banisters. And I’m not listening to my friend when she says it will only take five minutes. Because I don’t believe her anymore.

This site uses Akismet to reduce spam. Learn how your comment data is processed.

Todd & Jen Figure it Out

We're just your average middle-aged couple, staring at an empty nest and trying to figure out what to do now. Todd creates magic in his workshop and Jen thinks up all kinds of things to do around the house, which usually means more work for Todd. It's a match made in heaven.

Sign up to receive our quarterly newsletter. It will be chock full of things you’ll need to know. What those things will be, we can’t be sure.